The cuisine is rich and varied Sassari, composed of many dishes strongly linked to tradition, based on vegetables and less valuable parts of animals for slaughter, especially lamb, veal and pork.

Among the first courses we find the mineshtra 'and fasgioru (or mineshtra' and patatu), a soup made with beans, potatoes, bacon, wild fennel and sun-dried tomatoes, and giggioni, gnocchi with sausage gravy. 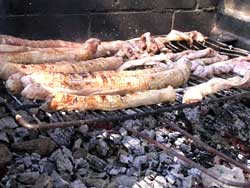 Among the main courses, mainly meat, you can enjoy traditional cordula, lamb entrails wrapped in the gut and cooked with peas, onions and tomato sauce, although the best known dish is the ziminu, calf sweetbreads cooked over coals in the grill; these are some variations in marinate a few hours before cooking.

Other typical dishes are the meat of pedi agnoni, or legs of lamb cooked with garlic and parsley or in tomato sauce with plenty of garlic and vinegar, and the tripe cooked in tomato sauce, topped with grated pecorino cheese.

Not being a coastal town, Sassari has a great tradition in the preparation of dishes based on fish; exception eel, which lives in freshwater streams, cooked on the grill after being marinated or simply dressed with a little olive oil after cooking. Grilled sardines are also prepared.

The favata is a very thick soup made with dried beans, cabbage, fennel, flavored with pork, traditionally prepared during the carnival or consumed on social occasions; a variation is the soup of cabbage, which are put in the potatoes instead of beans. The beans can also be cooked in ribisari, that is boiled and fried with garlic and parsley. In addition to the broad beans, artichokes also play an important role in the kitchen Sassari: traditionally prepared with potatoes (ischazzofa and patatu) or eaten raw, bathing them in the dip (sauce of olive oil, salt and pepper), fried or cooked with garlic and parsley or, finally, as a seasoning lamb.

Dish "adopted" is the Fainé Genoese, obtained from a simple mixture of chickpea flour, oil, water and salt (often enriched with more ingredients to taste like onions or sausages), cooked in a pan at high temperature and served already cut, often with crushed black pepper. It is prepared in some local restaurants (which is the only dish served) but also in many pizzerias and sandwich shops.

Among the desserts, as well as those typical of northern Sardinia (papassini, tiricche and seadas), are typical of the city them frisgiori longhi (pancakes long), long strings of fried dough flavored with anise and orange peel, prepared mainly during the carnival period.