Festivals and events in Sassari

Dating tourist should not miss are the Faradda of them Candelieri, August 14, and the Sardinian Cavalcade of May.

The Faradda of them candareri Sassari - The descent of the Fence

On August 14, the eve of Assumption of the Virgin Mary, in Sassari is Festha Manna, or Great Festival: the city is crossed by Faradda of them candareri, one of the deepest events on the island.

The Faradda (literally, "descent") of Candelieri born in the Middle Ages, when the rulers Pisans encouraged the formation of Gremi, guilds of Arts and Trades, later introducing the use of the procession on the eve of Assunta and the Virgin of the large votive candles. The festival grew in importance in 1500, after a great plague that ended its August 14: The guild then created the monumental candles, which were brought to Santa Maria di Betlem to make a vow to the Madonna. Since then the vote is renewed every year, a party still deeply felt by the people who poured Sassarese until late at night through the streets of the old town invaded by music, songs and echoes of the drums.

Eight candles, representing the ancient city corporations (carpenters, tailors, masons, shoemakers, blacksmiths, merchants, sellai factors and pastors), are carried on the shoulders in a procession that winds through the streets of the center. The exhibition is led by lu Cabu carriagiu, the head of the carriers, who coordinates the turns and movements of each candlestick. Since Candelieri not weigh less than 400 kg, the ability of those who carry them will not be assessed only in physical strength, but also nell'abilità in support, because the procession winds to step dance, accompanied by the sound of flutes and the rhythm of drums.

Each candlestick, or Culumna Incoronada, is equipped at the base, on which are painted the names of the corporation and the effigy of the patron saint of Gremio, the media to carry arms. The top, and golden in the Gothic style, is adorned with numerous flags and strips of colored silk, called bola bola, many who are members of Guild: each member, taking the tape, binds to the candle, symbol of Gremio.

I Gremi I send greetings to the authorities and received the traditional greeting to zent'anni (a hundred years) by the Mayor.

The procession, colorful and lively, it begins with the solemn blessing of candles at the Church of the Rosary, which faces onto Piazza Castello, and continuing along the Via Turritana and other streets in the center, and ends with the entry of Candlesticks in the Church of St. Mary of Bethlem, accompanied by a loud drum roll, where the guild members kiss the feet of the Virgin Dormiente. Before entering the Church, it is usually for Sassari, "explode" a generous applause to the Mayor, if you have done well during his tenure, or the whistle Sassarese if you have not played well his first task to be citizen.

Over parade of the Fence, there is the parade of Candalereddi carried by children, transported, as in the Candelieri more, is considered an honor granted only to nationals of Sassari.

The Sardinian Cavalcade in Sassari 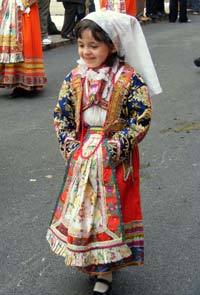 Since 1711, the city is also the Sardinian Cavalcade, a celebration that annually attracts thousands of spectators from all over the world, which since 1951 has organized annually in Ascension Sunday, the third Sunday in May.

The event, a secular nature, is a great parade of more than 50 folk groups from different regions of Sardinia in their costumes traditional (a total of around 3,000 people), accompanied by several horsemen representing many municipalities. For several years, the parade of folk groups was accompanied by the pair held all'ippodromo room in the afternoon, where the best riders sardi challenge in spectacular stunts on horseback, from the dances and songs in various places that entertain tourists and visitors to late evening.

The roots of the event are to be found in the parade held in honor of the visit to Sardinia of Umberto I and Queen Margherita of Savoy, which occurred in 1899.