The northern coast of Sardinia

The long northern coast, with its beaches and cliffs, rises from Alghero to Santa Teresa di Gallura , meeting the cities of Sassari and Porto Torres , and then descends to the east and reaches, after passing the Costa Smeralda and the Gulf of Orosei .

The coast of Sassari 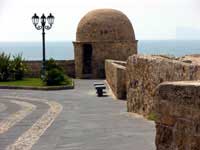 The coast of Sassari includes the west coast and the Gulf of Asinara , and extends from the rocky coast south of Alghero to Castelsardo .

Starting from Alghero, after passing a jagged and steep coast, you will meet the beach of Porto Ferro and the Cala dell 'Argentiera , where you can see the disused structures of the old mine and the miners' village. 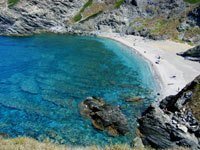 Continuing along the coast we find Stintino , a fishing village that today lives largely from tourism, whose most beautiful beaches are the beach of Platamona , often windy and excellent for windsurfing, and the Pelosa beach very popular with tourists at the point that today access is limited in number.

On the Gulf of Asinara, a former penal colony and now a nature reserve, there are the Saline beach and the Ezzi Mannu beach , with their beaches of fine white sand.

From Capo Testa to Capo Comino

Capo Testa is the northernmost tip of Sardinia, characterized by huge granite rocks shaped over the centuries by the winds and by the lighthouse located on the promontory. Nearby, recognizable by the Aragonese tower overlooking the sea, is the fishing village of Santa Teresa di Gallura , which has now become a charming tourist town that is very crowded in the summer.

Here is the Rena Bianca , a beach about 700 meters long, formed by a very fine sand that in some places takes on pink reflections due to the presence of tiny fragments of coral. A short distance from Santa Teresa di Gallura is the Marmorata beach , the northernmost stretch of coast of Sardinia, home to the prestigious Club Mediterranè.

Continuing east you come to Cala dei Corsari , whose transparent waters show, deposited on the bottom, the remains of ancient Roman columns. In the middle of the islands of the Maddalena archipelago , precisely between the islands of Budelli, Razzoli and Santa Maria, is the Porto della Madonna , an immense natural swimming pool; along the channel between the island of Caprera and the Gulf of Arzachena you will find the small Cala Coticciu , where the junipers reach the beach.

After passing the Maddalena archipelago, you enter the world of the Costa Smeralda , whose sea really has the color of a precious emerald. You immediately notice the different atmosphere that reigns along the 55 kilometers of coastline: luxurious boats enter and leave Porto Cervo , one of the best equipped and modern marinas in the Mediterranean. From the sea you can see the golfers playing on the Pevero course and you can admire the villas of businessmen, artists and characters from the cinema or television.

The Costa Smeralda ends with the long and sandy Liscia Ruja , in front of which lies the solitary Isola Mortorio and the opening of the bay of Cala di Volpe . Immediately after, another well-known locality: Porto Rotondo , with the gulfs of Cugnana and Marinella.

Entering the Gulf of Olbia , an important maritime port for connections with the continent, we notice the thinning of traffic, a clear sign of the departure from the "hot" area of the Sardinian coast. Leaving the Gulf of Olbia, the island of Tavolara and the neighboring island of Molara appear. Along the coast of the province of Nuoro , the sea alternates long and sandy beaches with small inlets with low rocks. Passing in front of San Teodoro and Budoni you can see some species of birds such as the gray heron and the pink flamingo.

Continuing south are the beaches of Posada , behind which stands the cliff on the top of which is the picturesque medieval village dominated by the ruins of the Castello della Fava, built around the 12th century. The beaches of Posada, with their fine and clear sand, are not crowded even in summer and, beaten by the wind, they are an ideal destination for surfers.