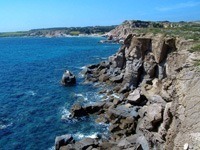 The island of San Pietro is one of the two islands of delSulcis, and is located in the south-west coast of Sardinia. With its 51 square kilometers is the sixth largest Italian island.

Legend has it that the apostle Peter, and direct return from Rome, was stopped on the island because of a storm: from this derives the current name of the island.

In antiquity the island offered shelter to the Phoenician ships, Greek, Carthaginian and Roman. In 1738, during the reign of Carlo Emanuele III, a colony of fishermen from ligurian Tabarka, an island off the coast of Tunisia, settled in the island of San Pietro and founded Carloforte, the only town on the island, where dedicated to fishing for coral, tuna, and salt production. The Ligurian origin of its inhabitants can be found in dialect, traditions, customs and nell'urbanistica of the city center.

In the second half of the nineteenth Carloforte lived period of greater prosperity, thanks to the exploitation of rich deposits of the coast from grane mining Belgian French and English: Because of the lack of real ports in the area, Carloforte became the main point support for the transport of minerals extracted. Began the glorious, however humble, era of "Battellieri men from the hardening of steel and solid ratings, provided that the loading and unloading on the shoulders, bringing the" coffette "ore.

Following the crisis that struck in mines throughout the area, the carlofortini returned to the ancient activities such as fishing, salt production and navigation. Today the economic development of the island is mainly linked to tourism, which is growing in year on year for the natural beauty of the place and the considerable efforts of the industry.

The coasts and inland

The north-west coast, the most wild and unspoiled, is characterized by a succession of coves, inlets, cliffs overlooking the sea and few beaches, while the east coast, which is also the port of Carloforte, is more flat and sandy.

Starting from the north-east, where are the traps of ancient plants, continuing to the west meet in Calalunga, White Notches, and the channel Memerosso, where the coast begins to take that aspect characteristic due to erosion. Particularly striking are the cave of Punta geese, so called because of the presence of gulls in dialect carlofortino are called "geese", and the cave of Nasca. There is also the Trogiu, a natural swimming pool in the middle of the rocks, and Calavinagra, perhaps the most beautiful fjord in the north-west.

Proceeding west meets Calafate, a deep inlet between two narrow walls of white rock, and passing the Lighthouse of Cape Sandalo, the westernmost point of the island, lies the Gulf of Becco, on which overlooking the remains of a small village of miners, and the pitfalls of the Spine.

The only beach located on the west coast is La Caletta, who is also the largest. The coast of Mezzaluna is characterized by a series of caves accessible only by sea. Proceeding south, the coast becomes rocky again. Here is La Conca, a natural amphitheater sloping to the sea, with a natural swimming pool in the immediate vicinity.

Going down to south there is the first beach on the southern coast: the beach of Chinolle. From there on, the coast becomes an interlayer of beaches and cliffs. Meet beach Lucchese, La Bobba, in whose vicinity there are the columns, two stacks of trachytic rock emerging from the sea, beach Guidi, Puntanera the Giunco, the largest beach on the island that continues for some km until you come almost to Carloforte.

The interior of the island is hilly, with no water, covered by the typical Mediterranean scrub vegetation of the rosemary, myrtle, lentisk the cistus, arbutus, but especially the pine forests of Aleppo pine. Worth a visit Calavinagra the pond, which dries up in summer is completely due to strong evaporation, and saline in the vicinity of Carloforte, populated during the migration of many species of waterfowl.

In addition to some nuraghi, inside the island can meet the rock formations form, real sculptures shaped by the wind and weather, including the call mushroom stone, which has precisely the form of a mushroom

The island of San Pietro can be reached by ferry, about 30-40 minutes to traverse, from Calasetta or Portoscuso.

L 'Oasi LIPU Carloforte presents a remarkable variety of natural environments that provide an unusual look and wild, and represents an important place for nesting and stopover for many species of birds.

The most important species is the queen of the Falco, a rare bird of prey that nest in summer on the steep cliffs overlooking the sea and with his presence (about a hundred pairs) qualifies the Island of San Pietro, from a naturalistic point of view, as an area of international importance.

But you can see also other species such as jays, buzzards, peregrine falcon, the rare Seagull course, the particular coral red beak, green cormorant, and a large variety of small passerines, such as Occhiocotto, the Magnanini, the Sardinian Magnanini and Sterpazzolina.

Numerous activities dell'Oasi LIPU Carloforte: summer camp for the monitoring and study of Falco queen, guided tours, environmental education. The Oasis can be visited by contacting the manager, and guided tours must be booked.