The Castle District is the oldest of the four historic neighborhoods of the city of Cagliari. Located in position on a hill, about one hundred meters above sea level. The Pisans founded this neighborhood in the thirteenth century, fortified, and with walls, towers and bastions, and there established the headquarters of the civil, military and religious. From then until after World War II, the Castle has always hosted the the palaces of power and mansions, as the premises of the main institutions of the Kingdom of Sardinia.

The medieval quarter of Castello is the symbol and heart of the city of Cagliari, with its mighty walls that still surround much of the perimeter of the Castle, the imposing tower of Pisa and San Pancrazio dell'Elefante, the Bastion of Saint Remy and Porta dei Leoni, the Cathedral of Santa Maria, the narrow alleys and ancient buildings, such as the Royal Palace or Viceregio, the museum of the Citadel of Museums, antique shops and artisans.

Fortifications and towers of the Castle

The 2 towers of Pisa, the Tower of San Pancrazio, which stands on the highest point of the city, and the Elephant's Tower, which owes its name to the little elephant stone placed on a shelf angle, and the Torre dell'Aquila.

The Bastion of Saint Remy, adorned with palms, oaks and pines of Aleppo, was built in the late 800's on the ancient ramparts of the Spanish Mint and the Spur, with a facade of granite and limestone yellow and white. La Terrazza Umberto I, Il belvedere di Cagliari, and the Covered Walk were built later, in the early'900. From Bastion St. Remy you can see the old quarters of the Navy and Villanova, to a glimpse of the plain Campidarno, tin Molentargius, and in the distance the peaks of the Seven Brothers. The esplanade is the site of the ramparts every Sunday morning, a typical flea market, and the promenade deck hosts exhibitions and events.

The neighborhood, from its foundation official seat of the main authorities of the place, and residence by families sarde noble, still offers the chance to admire the ancient buildings in which they wrote large sections of the history of Sardinia.

The Royal Palace (Palazzo Viceregio), currently headquarters of the Prefecture and Chamber of meeting of the Provincial Council, was residence of the Viceroy of the Kingdom of Sardinia and later housed the exiled Savoy from Piedmont. The facade is decorated by a long succession of pilasters, within the more significant is the time the atrium, the staircase and the hall of representation. Then l 'Ex Palazzo di Città, an ancient seat of the municipal Cagliari until the end of the nineteenth century, the Archbishop Palace, the Palace of Seziate, adjacent to the tower of St. Pancras, where the meetings were held (seziate) during which the viceroy listened to the requests of the prisoners from the nearby tower and the Palazzo of the University, a vast complex eighteenth Baroque Piedmont, headquarters of the University of Cagliari, which includes the offices of the rector, the hall, the university library and art collection "Luigi Pylons".

Then Palazzo Boyl in neoclassical style, which incorporates in its structure the Portico delle Grazie and the remains of the fourteenth century Torre dell'Aquila, and Finally, the Town Hall, built in the early twentieth century neo-Gothic turrets and with mullioned windows. You can visit by appointment to admire the paintings of John Marghinotti and Filippo Figari and the Triptych of the directors, in the hall of the junta. 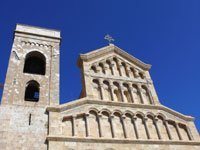 Castle in the district there are seven churches: the Gothic aragonese belong Purissima of the Church, the Church of Saint Lucia, the Church of Our Lady of Hope, the Church of Santa Maria del Monte, in the past of the oratory oldest brotherhood of Cagliari and today headquarters of the Sovereign Military Order of Malta. Belong to the baroque style instead of the Basilica of Santa Croce, the Order of Saints Maurice and Lazarus, and the Church of St. Joseph Calasanz, ancient church of Piarist.

The most important is the Cathedral of Santa Maria, built by Pisani in the thirteenth century, which has undergone profound changes over the centuries of style. In 1930 the facade was redone in an attempt to restore the church of the original Romanesque-style Tuscan lost over the centuries. The interior has three naves, with presbytery and transept, which retains the pulpit Mastro Guglielmo sculpted for the Cathedral of Pisa, then donated to the city of Cagliari, as well as some paintings of the XV and XVI century wooden sculptures of the fourteenth century. Under the altar is a crypt dug graves with the principles of the House of Savoy, in addition to the remains of martyrs found in the Basilica of San Saturnino. On request we can also visit the Chapter Museum, where collections are the most important works of the Treasury of the Cathedral.

Some of the most important museums are located in Cagliari Castle, the premises of the modern museum known as the Citadel of Museums. In this complex of buildings built in the 70s on the area that housed the Royal Arsenal, there is the Archaeological Museum, the Pinacoteca National Collection of wax anatomical models "Susini and the Museo Civico d'Arte Orientale" Stefano Cardu "are also organized exhibitions and other cultural events. Cittadella is accessed through the door an imposing nineteenth century, overlooking the Piazza Arsenale.

In addition to the museum housed in the Citadel you may visit the Chapter Museum, which houses the Cathedral's Treasury, Collection and Luigi Pylons ", held in the Palace of the University.